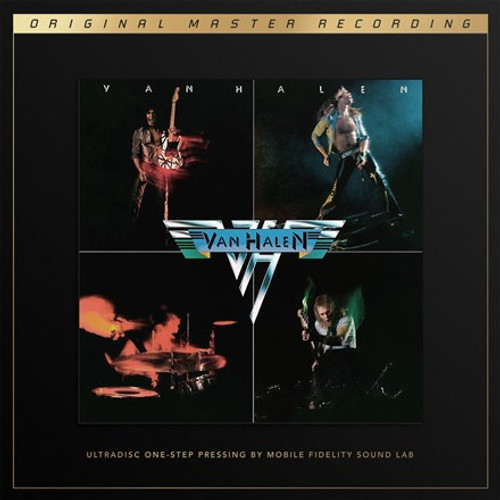 Landmark 1978 Album Announced the Arrival of a Revolutionary Guitarist and Permanently Changed Music: 10-Times-Platinum Van Halen Includes "Runnin' with the Devil," "Eruption," "You Really Got Me"

Van Halen did more than announce to the world the earthshaking arrival of a revolutionary guitarist. Performed by an enterprising California quartet that took its name from two of its principal members, the 1978 debut ripped headlines away from punk, injected fresh energy into a then-moribund rock 'n' roll scene, reimagined how heavy music and throwback pop could coexist, and invited everyone to experience the top-down pleasures of a beachfront Saturday night every day of the week no matter where they lived. Painstakingly restored by Mobile Fidelity Sound Lab, and the first of a multi-album series in an exciting partnership between the famous reissue label and Van Halen, Van Halen delivers feel-good thrills and hormonally charged desires like never before.

Strictly limited to 15,000 numbered copies, pressed on dead-quiet MoFi SuperVinyl at RTI, and mastered from the original analog master tapes, Mobile Fidelity's ultra-hi-fi UltraDisc One-Step 180g 45RPM 2LP collector's edition pays tribute to the record's merit and allows fans to experience Van Halen's original blend of raw power, Hollywood flair, and vaudeville fun for generations to come. Playing with reference-setting sonics that elevate a 10-times-platinum landmark whose importance cannot be quantitatively measured, this definitive version provides a clear, clean, transparent, balanced, and turn-the-volume-up-to-11 view of an album that birthed entirely new styles. Since MoFi's unique SuperVinyl compound allows you to crank the decibels to your wildest desires without risking noise-floor interference, prepare to not only hear but feel Van Halen in your chest, no fifth-row concert seat necessary.

The premium packaging and gorgeous presentation of the UD1S Van Halen pressing befit its extremely select status. Housed in a deluxe box, it features special foil-stamped jackets and faithful-to-the-original graphics that illuminate the splendor of the recording. This UD1S reissue exists as a curatorial artifact meant to be preserved, touched, and examined. It is made for discerning listeners who prize sound quality and production, and who desire to fully immerse themselves in everything involved with the album, from the iconic cover art to Eddie Van Halen's pioneering fretwork and his brother Alex's double-bass percussion.

Indeed, could a piece of music that transformed how countless guitarists approached their instrument be more fittingly named than "Eruption"? Likely not, and in just 102 seconds, Eddie Van Halen rewrote, reimagined, and reconfigured a vocabulary last significantly updated a decade earlier by fellow six-string wizard Jimi Hendrix. Akin to the Washington State legend, Eddie Van Halen developed his own techniques and tones all the while making his seismic accomplishments seem effortless. Devoid of the pretense, ego, and showiness that infected many of his imitators, the Dutch native sticks to a straightforward approach that underlines the authority, prowess, and visionary scope of his playing and then-unheard-of finger-tapping skills. Throughout Van Halen, he establishes himself as an instant idol – a savant whose otherworldly combination of breadth, poise, feel, speed, force, and melody seems beamed in from another galaxy.

As does nearly every song on the record, whose cohesiveness and dynamic put into perspective the advanced chemistry and one-for-all spirit the youthful band had out of the gates. Having paid its dues for years in bars and clubs – going as far as recording a 24-track demo for Kiss bassist Gene Simmons at Village Recorders only to be spurned by management companies that felt its music wouldn't go anywhere – Van Halen finally got a deserved break when Warner Bros. executives signed the group in 1977. The subsequent recording sessions further testify on behalf of the band's synergy and alignment. Completed in just a few weeks with producer Ted Templeman, Van Halen was primarily cut live in the studio with minimal overdubs and edits. The explosiveness, energy, and electricity remain definitive, and as heard on this UD1S set, put the group on a private stage – humming amplifiers, Frankenstrat guitar, bright spotlights, sweaty headbands, and then some.

Van Halen yielded just one hit in the form of a Top 40 single (a breathless cover of the Kinks' "You Really Got Me") but practically every song on the revered LP has become a staple. Named the 202nd Greatest Album of All Time by Rolling Stone and considered by countless experts as one of the best debuts in history, the record displays what can happen with four distinct talents gel and strive for the same purposes. In Van Halen's case, the latter almost always involved partying, freedom, sex, and, in the immortal words of singer David Lee Roth, living "life like there's no tomorrow." The celebration manifests from the opening notes of the strutting "Runnin' with the Devil" – announced with the blare of droning car horns, Michael Anthony's robust bass line, and Alex Van Halen's thumping drumming – and continues through the conclusion of the white-hot "On Fire," goosed by Eddie Van Halen's race-track-ready lines, Roth's flamboyant deliveries, and the rhythm section's cat-like pounce.

Picking out individual highlights on Van Halen is akin to trying to count all the stars in a clear nighttime desert sky: There are far too many to identify, once you see one you notice another dozen you didn't spot before, and the cluster is best enjoyed as a whole. What's evident over repeat listens is the sheer diversity, a fact that's often overlooked: The high harmonies and background funk of "Jamie's Cryin'"; the insistent cane-and-a-tophat shuffle and doo-wop shoo-bop vocal break on "I'm the One"; the throwback acoustic blues that spreads into fast-paced, single-entendre wildfire on the Roth-led standout interpretation of John Brim's "Ice Cream Man." Like the man says, on Van Halen, all the flavors are guaranteed to satisfy.