Price Now $49.99
Was $59.99
Was
Save $10.00 (17%)
This product is not eligible for further discounts.
Questions and Answers
Availability: In Stock
This item is in stock and ready to ship. Depending on the time of day when you place your order, it will ship same day or next business day. 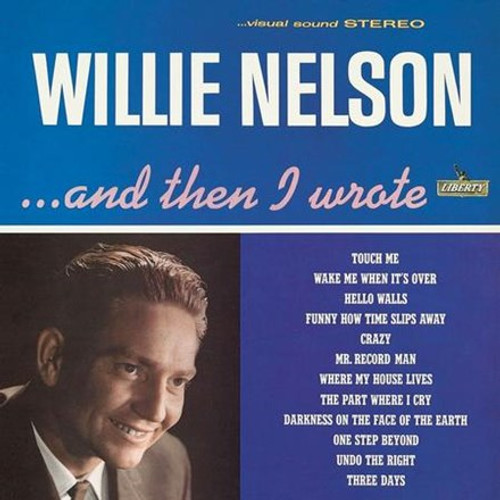 Long before selling over 40 million records and before he sang single a note, Willie Nelson started his career as a songwriter/hit maker. The ...And Then I Wrote LP was originally released on Liberty Records in 1962 and debuted Willie's unique vocal stylings to the world at large for the first time. The 12-track collection features all original compositions including the legendary hits "Crazy" (made famous by Patsy Cline), "Funny How Time Slips Away," "Touch Me" and "Hello Walls." As the prophetic liner notes read: "It is rare that a truly great songwriter is also an exciting vocalist - Johnny Mercer, Hoagy Carmichael, and a handful of others. Now, with pride, Liberty Records presents the latest member of that select group. His name is Willie Nelson."

It wasn't just the songs on the album that ascended to the country canon, including the previously mentioned hits, but the deep cuts like "Mr. Record Man," "Undo the Right," and "Wake Me When It's Over." The sheen of the Nashville sound on this record is mercifully dialed down. It was produced by the head of Liberty's country division, Joe Allison, partly in Music Row's famous Quonset Hut studio and partly in Hollywood. Allison appreciated Willie's idiosyncratic singing style and kept his vocals out front, dropping the glossy chorus back in the mix and eschewing strings altogether.

There was no doubt that this country classic deserved the wider-spaced grooves, improved cartridge tracking, and noticable reductions in distortion and high frequency loss that are testament to a 45 RPM four-sided Analogue Productions reissue. So four glorious sides of 180-gram dead-silent vinyl pressed by Quality Record Pressings it is. And the mastering was put in the capable hands of engineer Matthew Lutthans at The Mastering Lab by Acoustic Sounds working with the original master tape. The Mastering Lab upholds the quality standard achieved by the late Grammy-winning mastering engineer Doug Sax that made the brand famous. To top it off ...And Then I Wrote comes sleeved in a handsome deluxe Stoughton Printing tip-on gatefold jacket.